During the days of 18-20 June, 2017 a conference was held at Lucy Cavendish College, Cambridge : ‘Agatha Christie – a re-appraisal’. There were two days of presentations and keynote speakers, with a getting-to-know-you session on the first evening and a reading of her play A Daughter is a Daughter on the second. This was the fourth such conference, and the first in Cambridge.

It was perfectly brilliant of the organisers to use this particular college, because Cavendish is the family name of the main protagonists in The Mysterious Affair at Styles, a book referenced many times during the course of the two days. Indeed, the main College building used was almost Styles-esque. 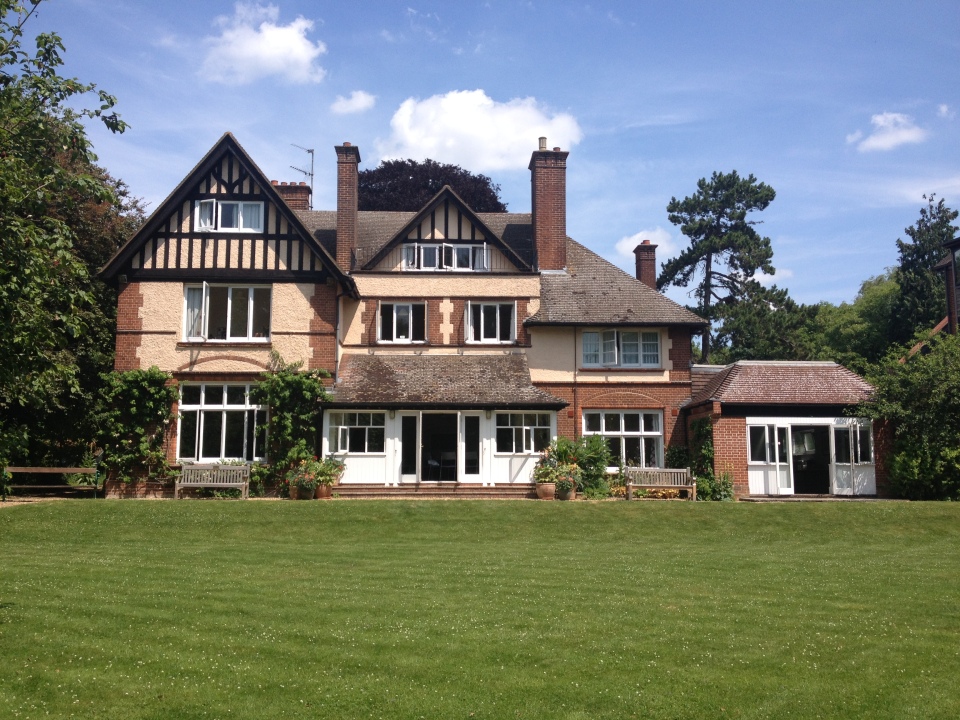 Destination Unknown
I had no idea what to expect. I had heard about the event from Sophie Hannah, who was attending and had helped to organise bits of it, and I guessed it would be full of fans like me.

What I certainly didn’t expect was that I would be one of the oldest people there, nor that most of the people attending had travelled much further than I had to get to it: five from the US, one from Brasil, one from Melbourne…

There was a real mix of nationalities and ages.

Dumb Witness
The papers presented ranged from the strictly academic to almost fanzine level, and the content of the presentations ranged from the quite brilliant to the positively barking: I cannot say that I bought into all of the pet theories on show.

I soon realised that every one of the other 45 or so people there knew far more about Swigatha’s life, books and characters than I did. Some are only half my age, or less. I had begun to consider myself a bit of an expert but, boy, am I not.

One of the presentations was entitled Unnatural Death: Agatha Christie’s Lesbians, and it was superb, providing real, and certainly not fanciful, insight into AC’s depiction of some of her characters.

Another was Old Ladies on Trains: The Inherently Chronotopic Nature of Miss Marple’s Detection in 4:50 from Paddington.  I wasn’t so sure about that, possibly because I couldn’t hear half of it and didn’t know what chronotopic meant. When I got home, I looked it up, but there was no entry for it in my Chambers.

The Secret of Chronotopes
I contacted a niece-in-the-know, who has done a creative writing course: it loosely refers to the inter-relationship of space and time and is a consideration in any literary composition.   She said.

Eventually the penny dropped, and I saw that, in 4:50 from Paddington, Swigatha uses time-space in a unique and inspired way. It starts with Miss Marple’s friend travelling to see her by train (the 4.50 from Paddington). For a short while, another train is running in parallel to it:

At the time when the two trains gave the illusion of being stationary, a blind in one of the carriages flew up with a snap. Mrs McGillycuddy looked into the lighted first-class carriage that was only a few feet away. Then she drew in her breath with a gasp and half-rose to her feet. Standing with his back to the window and to her was a man. His hands were around the throat of a woman who faced him, and he was slowly, remorselessly strangling her.

Almost immediately, the other train then draws away. No-one at the station believes Mrs McGillycuddy’s story, so she carries on to Miss Marple’s house and tells her what she has seen. They report it to the police, who find nothing.

Miss Marple is the only person who believes her friend. She sets out to deduce where the body MUST be, given the constraints of time and space that the murderer had to deal with when disposing of the body. It had to be done i) before the train reached its destination and ii) at a place where the body could not easily be found.

Hers turns out to be a quite brilliant deduction, and, yes, ‘inherently chronotopic’ (but there is an element of “now I know that, what do I do?”).

Come Tell Me How You Live
There was a variety of presentations about different aspects of Agatha Christie and her work.

The Man from Melbourne presented a paper on AC’s treatment of Americans.  Tito Prates, the Brazilian Ambassador for Agatha Christie,  discussed the challenges of writing a modern biography of her.

The Big Four
Two of the most enjoyable presentations were from pairings of young Americans.

Kemper Donovan and Catherine Brobeck are literature graduates from Stanford and Yale who host a weekly podcast called All About Agatha, which analyses each Christie novel in order of publication (by June 2017 they had got as far as 1932).

Their unscripted talk looked at how Swigatha treats the aftermath of the revelation ‘whodunit’: in almost all of her stories, she concentrates on reconciliation between the surviving characters, rather than on any residual bitterness or lasting desire for revenge. Maybe that is one reason why they are so enduringly popular.

The two presented very well together and their podcast has as a result become a must.

The second pair, Audrey Cooper and Emily Lilley, are the brains behind The Year of Agatha. They devoted that year (2016) to reading Swigatha’s complete works, sharing their thoughts and findings through twitter, facebook, Instagram and Google Blogger.

They had some great ideas to draw people in, and here are two:

The knockout continued until only two books were left. I’ll leave it to you to guess which were the last two books standing, and who won the final, but here is a heavy hint: and then there was one…

This presentation was simply delightful and gave much food for thought. Most of the people wanting to know more about Agatha Christie were younger then the brains behind The Year of Agatha. 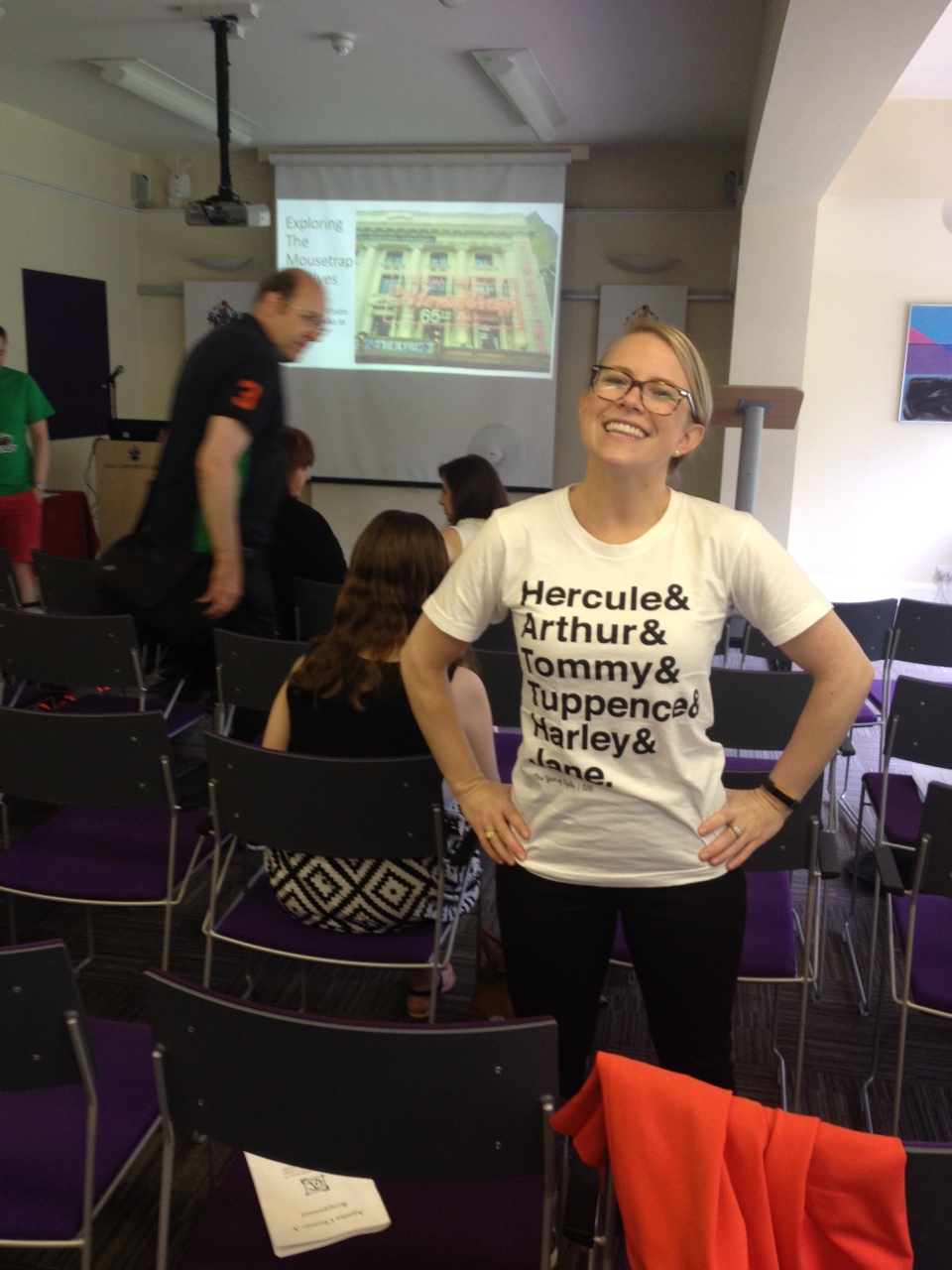 Emily Lilley sporting The Year of Agatha’s T-shirt: she has promised to add Parker Pyne, Battle etc to the next one

A Daughter is a Daughter
The cast for the read-through included members of the disbanded Agatha Christie Theatre Company, two of the organisers and Sophie Hannah herself.  The Company’s most recent director, Roy Marsden, was there too (he played PD James’ Inspector Dalgliesh in the TV adaptations of her books).

It was a unique event, exposing the Mary Westmacott in Agatha Christie. We repaired to the Punter afterwards to be regaled with a huge firework display at a nearby cricket ground (the University students were celebrating the end of exams.). 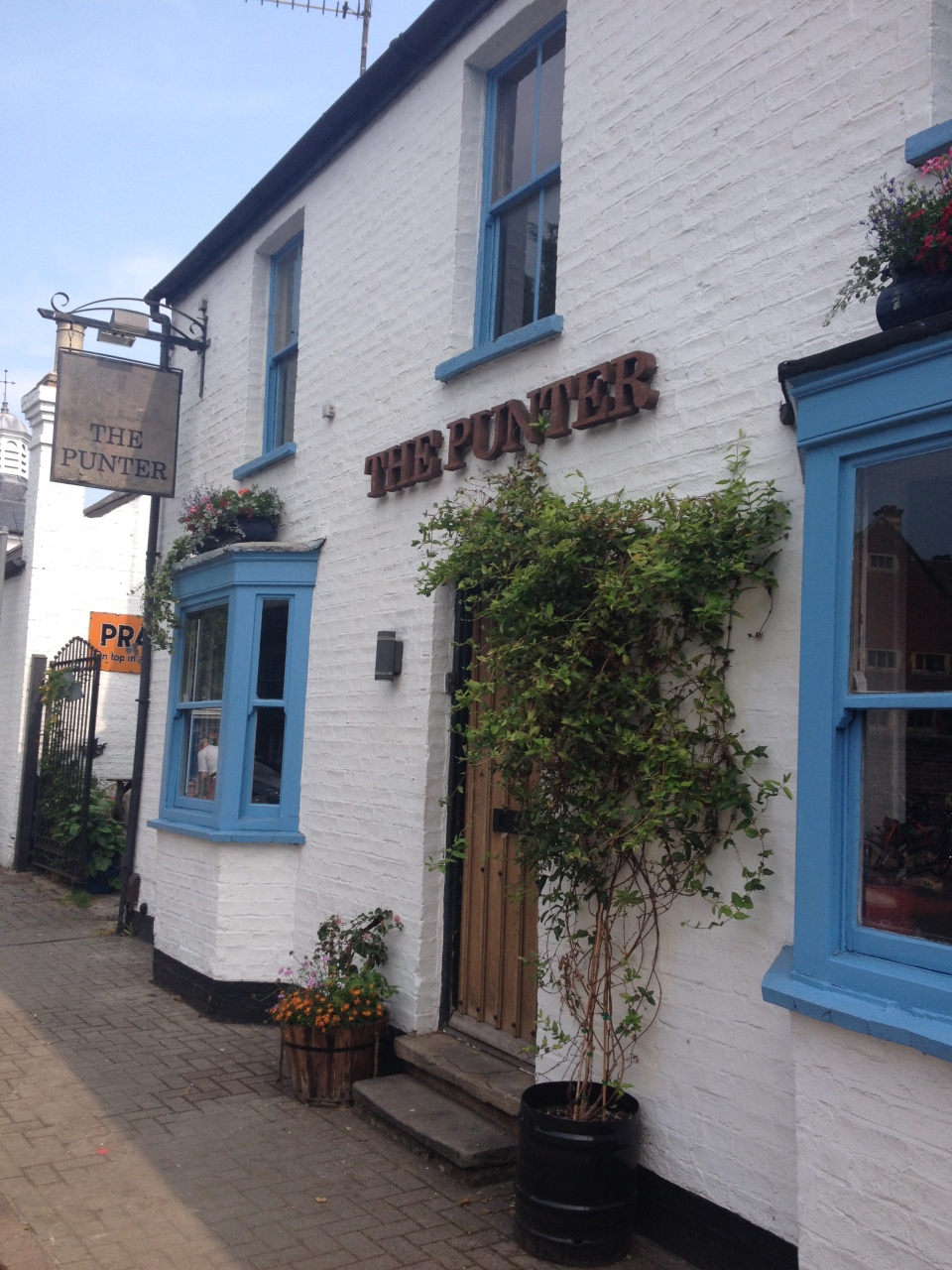 Verdict
I could only stay for a bit on the final day, but I am so glad I went. It was a terrific event, conducted in sweltering conditions that somehow were not oppressive.

It was also reassuring and fun to meet so many other people who have come to the same conclusion as I have: that there is much more to Agatha Christie than is generally acknowledged. Agatha Christie: A Re-appraisal is basically what the Swigatha blog and website is all about.

REFERENCES
Here are a couple of links to the projects mentioned:

All About Agatha weekly podcast
The Year of Agatha blog